The Meta-Remix is a new mixing technique and form of music invented by Mark Loren in January 2016.

It’s not a remix (in the traditional way), nor a mash-up, but what its author has defined as the remix of the remix.

The meta-remix is the result of a creative process. A new form of music and art, and, at the same time, a useful promo tool for DJs (as meta-remixers) and the artists and labels of the original track.

The META-REMIX represents a new concept in the electronic dance music scene. As explained in Mark Loren’s Meta-Remix Manifesto, this mixing technique is achieved by overlaying two or more official remixes of a track, possibly combined with the original song or part of it. Meta-remixing has strict rules. It was born during a live DJ performance, but this execution can also be recorded in a studio and become a track playable by other DJs. In fact, by definition the meta-remix is a very short mix (usually a few minutes) where the DJ can show all of his abilities and skills in mixing two or more tracks (i.e. remixes) in a very rapid and personal sequence.

The first ever Meta-Remix was Robin Shulz – Sugar feat. Francesco Yates [Mark Loren Meta-Remix] released on Youtube as a non-official promo on the 8th of June 2016.

Benefits of the Meta-Remix for artists and labels:

First of all, the Meta-Remix is a tool for DJs. Secondly, it’s a new experience for audiences. It’s a promotional tool, both for the meta-remixer and artist of the original version and its remixers. It’s also a promo tool for labels, since it stimulates listeners and DJs to purchase the official remixes and the original release.

In fact, a meta-remix can be achieved only by using a remix pack of the official releases.

Once the remixes have finished their lifecycle, the Meta-Remix stands as something new in the music scene and DJ world. So, it’s an alternative support track that can give a longer life to the original versions in terms of airplays and spinning in clubs, since DJs and radio presenters love new stuff.

The Meta-Remix is usually a non-official promo that cannot be sold or purchased.

The Meta-Remix doesn’t claim copyrights. All rights always go to the original writers, producers and remixers.

The Meta-Remix is an artistic expression where DJs can challenge their skills in mixing.

It’s a creative process that enables the meta-remixer to develop a better vision of song structure.

It gives everyone the possibility to be like a famous remixer. You don’t need a great studio, only a simple consolle and you can do great things like major artists and DJs do.

The meta-remix allows you to get the best of the best!

But never forget to credit the original writers/artists/remixers! You are not the artist who can claim copyrights, but only a “promoter” of their work.

However, any meta-remix can be considered a form of art, a unique creative process that brings to life a new composition. You are the only creator, the meta-remixer. 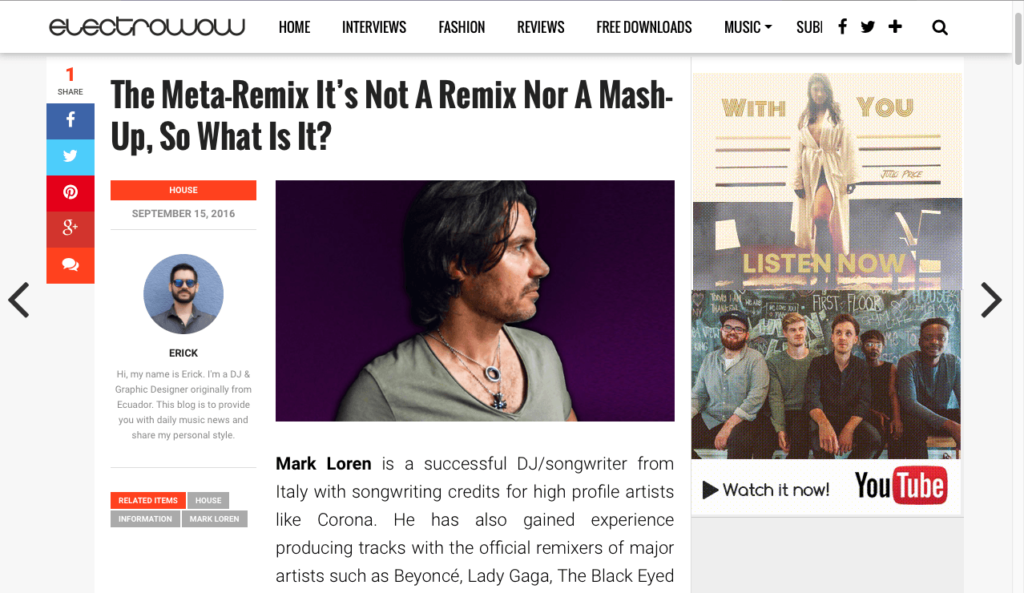 Mark Loren is a successful DJ/songwriter from Italy with songwriting credits for high profile artists like Corona. He has also gained experience producing tracks with the official remixers of major artists such as Beyoncé, Lady Gaga, The Black Eyed Peas and Bob Sinclar.

You may have heard his version of the classic track “Sugar” by Robin Schulz. It’s not a typical remix, nor is it a mash-up. Instead, it’s a new concept: the

META-REMIX
A few months ago when Mark was playing at a big event, he wanted to play “Sugar”. He had just bought the complete remix-pack but lacked the time to listen to each remix before the gig. After quickly browsing through the material, he couldn’t pick a favorite, so therefore he decided to play them all.

Mark Loren: “I loaded all of the remixes on the 4 decks of my controller and started playing with parts of the original song. It was a lot of fun and it worked out really well. People went crazy and then it all started!”

The Meta-Remix was born
“I then defined the meta-remix as a composition or mix created by mixing 2 or more remixes of a song, possibly combined with the original version of the song. The prefix “meta” means that you create the remix of the remix with a distinctive new identity… “The idea for this term came from my studies at the University of Bologna. At that time, I used to study semiotics. A friend of mine and I used to talk for hours about it. He was the assistant of Umberto Eco, a famous semiologist who wrote the best seller/movie “The Name of the Rose.”

“In fact, in semiotics studies, the term “meta” is used to explain codes of communication. I thought it was perfect to explain the difference between a mash up, a remix and my DJing technique. To further explain, I wrote a so-called ‘Manifesto of the Meta-Remix,’ a declaration text similar to what Futurists did in the early twentieth century, such as the Italian artist Marinetti. Even if in the past we can find similar mixing approaches, the manifesto explains why this is a brand new mixing philosophy, celebrating the creativity of the DJ as an artist.”

Mark Loren
The meta-remix only has artistic and promotional value and doesn’t claim copyright. However, it does have the ability to extend the life of releases. For example, Mark’s meta-remix of Sugar has gained a lot of popularity worldwide, including praise from Select Radio (UK), Radio Darmstadt (Germany),Beatsmedia (UK) and Jason Lin of Billboard (USA) who felt it was the best mix of the song.

As a DJ, Mark recently played numerous gigs in Ibiza, one of his favorite places to spin and the heart of dance music in Europe.
Mark Loren: “Ibiza was awesome! The vibe you have there is unique. All the club goers are very selective. When it comes to my sets, I play a lot of house and deep house with slight influences of tech house. My sets showcase a lot of energy and I love to play with vocals. Perfect for the island.”

As mentioned, Mark has gained a lot of experience working with other DJs and producers for mainstream artists.

Mark Loren: “I love pop music because I think it has a deep impact on people and can give a lot of energy. So, producing music with a mainstream appeal is fun for me. It generates very good feelings and I love to play with vocals and melodies. Right now I’m working on a new track featuring a great American rapper. Check it out on my social media.”

MANIFESTO OF THE META-REMIX
The neologism “meta-remixing” affirms the art of remixing remixes. This is an artistic expression by which a DJ expresses, explores and shows their mixing and creative abilities bringing to new life a third mix (called meta: i.e. a remix of the remix) which has a distinctive new identity. The meta-remix is a composition or mix created by mixing 2 or more remixes of a song/track possibly combined with the same song or part of it. The meta-remix can be achieved by overlaying the remixes of the track seamlessly over the original track (or part of it) or by overlaying and mixing the remixes only. It’s an artistic form of music. It can be done at a live performance, or recording in a studio.

The meta-remix is the result of a complex DJing technique, which follows strict performance and moral rules:

The meta-remix is achieved by mixing only official remixes of the song (or parts of it) combined with each other or with the song itself, for the purpose of creating an alternative track.

A meta-remix is strictly composed of original parts of the song and of the remixes. The DJ never introduces external elements such as grooves, effects, vocals or parts of other songs.

The meta-remix credits clearly attribute all rights to the original owners, composers and remixers of the song.

The meta-remix is created for artistic and promotional purposes by respecting a “fair use” doctrine of copyright law. It is aimed to benefit both the DJ who has created it and the original authors/artists/remixers of the song, by generating further interest, buzz and exposure to the original song and the meta-remixer.

This website uses cookies to improve your experience while you navigate through the website. Out of these, the cookies that are categorized as necessary are stored on your browser as they are essential for the working of basic functionalities of the website. We also use third-party cookies that help us analyze and understand how you use this website. These cookies will be stored in your browser only with your consent. You also have the option to opt-out of these cookies. But opting out of some of these cookies may affect your browsing experience.
Necessary Always Enabled
Necessary cookies are absolutely essential for the website to function properly. This category only includes cookies that ensures basic functionalities and security features of the website. These cookies do not store any personal information.
Non-necessary
Any cookies that may not be particularly necessary for the website to function and is used specifically to collect user personal data via analytics, ads, other embedded contents are termed as non-necessary cookies. It is mandatory to procure user consent prior to running these cookies on your website.
SAVE & ACCEPT